Laura Jane Grace is an American musician best known as the founder, lead singer, songwriter and guitarist of the punk rock band Against Me!. She also fronts the band Laura Jane Grace & The Devouring Mothers. 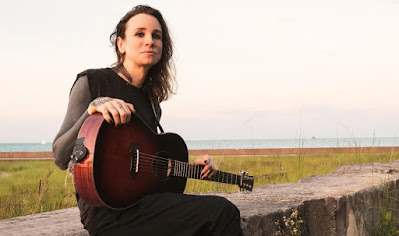 At age 13, she played bass in her first band, known as both the Black Shadows and the Leather Dice as they had never agreed on a name. Grace befriended James Bowman when they met on their first day of freshman year at Naples High School; the two have been close ever since. In 1997, at age 17, Grace dropped out of high school and began writing songs, naming the musical project Against Me!. Moving to Gainesville, Florida, at 18, she began performing as Against Me!, either alone on an acoustic guitar or with friend Kevin Mahon accompanying by drumming on pickle buckets. Her songs drew influence from early acoustic protest music, covering topics such as class struggle. Early Against Me! shows were played at dive bars, laundromats, and anywhere else that would allow Grace to perform, to audiences of a few or even zero.

In 2000, Grace convinced Bowman to move to Gainesville and began teaching him how to play Against Me! songs on guitar. After some early EP releases, Against Me! developed into a full band consisting of Grace, Bowman, bassist Dustin Fridkin, and drummer Warren Oakes. Their debut album, Against Me! Is Reinventing Axl Rose, was released in 2002 through local independent record label No Idea Records. With Fridkin replaced by Andrew Seward, the band signed to DIY indie record label Fat Wreck Chords for 2003's Against Me! as the Eternal Cowboy and 2005's Searching for a Former Clarity. In December 2005, Against Me! signed to Sire Records, a subsidiary of the Warner Music Group. 2007's New Wave, brought the band mainstream success: It debuted at no. 57 on the Billboard 200; featured their first charting single, "Thrash Unreal", which reached no. 11 on Billboard's Modern Rock Tracks chart; and was named as Spin's album of the year.

Grace's solo EP, Heart Burns, was released in October 2008. Timed to coincide with that year's United States presidential election, the EP's songs addressed the country's political and economic climate, criticizing presidential candidate John McCain and the trial of environmental activist Eric McDavid. Against Me!'s fifth studio album, White Crosses, was released in 2010 and became their most successful, reaching no. 34 on the Billboard 200. Against Me! left Sire in November 2010.

Grace came out as a transgender woman in May 2012. On November 15, 2016, her memoir Tranny: Confessions Of Punk Rock's Most Infamous Anarchist Sellout, co-written with Noisey editor Dan Ozzi, was published. Much of the book is based on Grace's journals, which she had kept since third grade. In July 2018, it was announced that Grace would release an album in the fall of 2018 under the name Laura Jane Grace and the Devouring Mothers on Chicago-based Bloodshot Records. The record, Bought to Rot, was made with bassist Marc Jacob Hudson and drummer Atom Willard (Against Me!, Angels & Airwaves, The Offspring). Her last solo album, Stay Alive, came out in 2020 on Polyvinyl Record Co.