Roberta Joan "Joni" Mitchell CC (née Anderson; born November 7, 1943) is a Canadian singer-songwriter. Drawing from folk, pop, rock, classical, and jazz, Mitchell's songs often reflect on social and philosophical ideals as well as her feelings about romance, womanhood, disillusionment, and joy. She has received many accolades, including nine Grammy Awards and induction into the Rock and Roll Hall of Fame in 1997. 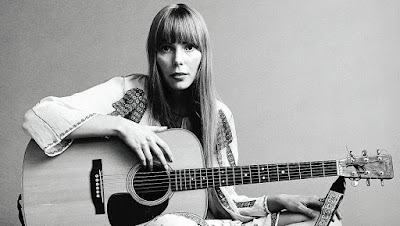 Mitchell started singing with her friends at bonfires around Waskesiu Lake, northwest of Prince Albert, Saskatchewan. Her first paid performance was on October 31, 1962, at a Saskatoon club that featured folk and jazz performers. At 18, she widened her repertoire to include her favourite performers, such as Édith Piaf and Miles Davis. She continued to play gigs as a folk musician on weekends at her college and at a local hotel. She sang at hootenannies and made appearances on some local TV and radio shows in Calgary. In 1964, at the age of 20, she told her mother that she intended to be a folk singer in Toronto, and she left western Canada for the first time in her life, heading east for Ontario. On the three-day train ride there, Mitchell wrote her first song, "Day After Day". She stopped at the Mariposa Folk Festival to see Buffy Sainte-Marie, a Saskatchewan-born Cree folk singer who had inspired her. In 1965 she moved to the US.

While Mitchell was playing one night in 1967 in the Gaslight South, a club in Coconut Grove, Florida, David Crosby walked in and was immediately struck by her ability and her appeal as an artist. She accompanied him back to Los Angeles, where he set about introducing her and her music to his friends. Soon she was being managed by Elliot Roberts, who, after being urged by Buffy Sainte-Marie, had first seen her play in a Greenwich Village coffee house.  Eventually she was signed to the Warners-affiliated Reprise label by talent scout Andy Wickham. Crosby convinced Reprise to let Mitchell record a solo acoustic album without the folk-rock overdubs in vogue at that time, and his clout earned him a producer's credit in March 1968, when Reprise released her debut album, known either as Joni Mitchell or Song to a Seagull. Mitchell toured steadily to promote the LP. The tour helped create eager anticipation for Mitchell's second LP, Clouds, which was released in April 1969. This album contained Mitchell's own versions of some of her songs already recorded and performed by other artists: "Chelsea Morning", "Both Sides, Now", and "Tin Angel". The covers of both LPs, including a self-portrait on Clouds, were designed and painted by Mitchell, a blending of her painting and music that she continued throughout her career.

The following month, Reprise released her third album, Ladies of the Canyon. Mitchell's sound was already beginning to expand beyond the confines of acoustic folk music and toward pop and rock, with more overdubs, percussion, and backing vocals, and for the first time, many songs composed on piano, which became a hallmark of Mitchell's style in her most popular era. Her own version of "Woodstock", slower than the cover by Crosby, Stills, Nash & Young, was performed solo on a Wurlitzer electric piano. The album also included the already-familiar song "The Circle Game" and the environmental anthem "Big Yellow Taxi", with its now-famous line, "they paved paradise and put up a parking lot." Ladies of the Canyon was an instant smash on FM radio and sold briskly, eventually becoming Mitchell's first gold album (selling over a half million copies). She made a decision to stop touring for a year and just write and paint. The songs she wrote during the months she took off for travel and life experience appeared on her next album, Blue, released in June 1971.

Blue was an almost instant critical and commercial success, peaking in the top 20 of the Billboard albums chart in September and also hitting the British Top 3. The lushly produced "Carey" was the single at the time, but musically, other parts of Blue departed further from the sounds of Ladies of the Canyon. Simpler, rhythmic acoustic parts allowed a focus on Mitchell's voice and emotions ("All I Want", "A Case of You"), while others such as "Blue", "River" and "The Last Time I Saw Richard" were sung to her rolling piano accompaniment.

In the late 1970s, she began working closely with noted jazz musicians, among them Jaco Pastorius, Wayne Shorter, Herbie Hancock, and Pat Metheny as well as Charles Mingus, who asked her to collaborate on his final recordings.[13] She later turned again toward pop, embraced electronic music, and engaged in political protest. In 2002, she was awarded a Lifetime Achievement Award at the 44th Annual Grammy Awards. Mitchell is the sole producer credited on most of her albums, including all her work in the 1970s. A blunt critic of the music industry, she quit touring and released her 17th, and reportedly last, album of original songs in 2007.