Esther Forero Celis (10 December 1919 – 3 June 2011), better known as Estercita Forero or "La Novia de Barranquilla" ("Barranquilla's Darling"), was a Colombian singer and composer. Esthercita Forero sang to her land in an endearing and nostalgic way. Her songs are or were part of the Barranquillan collective imagination and have deeply penetrated the identity of its inhabitants, who recognize and revere them as popular anthems. She was the author of well-known and accepted songs such as "Mi vieja Barranquilla" (1974), "Luna Barranquillera" (1963), "La Guacherna" (1976), "Volvió Juanita" (1978), "Palito 'e matarratón"  (1964), "Tambores de Carnaval" (1978) and "Nadie ha de saber" (2002). 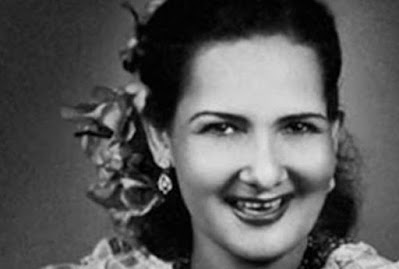 She began to sing at age 4 at family gatherings and theaters of her hometown, Barranquilla. At the age of 14, she made her debut in a radio station named "La Voz de Barranquilla" (The Voice of Barranquilla.) Four years later she toured throughout the Colombian territory.

In 1942, Forero made her first tour abroad. In Panama, she performed with success on "Radio Estrella de Panamá", with the accompaniment of pianist and composer, Avelino Muñoz. In 1945, she went to Venezuela where she first popularized the music of the Caribbean coast. She traveled to Santo Domingo, where she wrote her first song entitled "Santo Domingo", and the porro (a Colombian cumbia rhythm that developed into its own subgenre) "Pegadita de los hombres", which became a hit and sold 80,000 copies for three consecutive years. Around 1950, she recorded a very successful album in Puerto Rico with composer Rafael Hernández, which contributed to Colombian music finding an opening among other popular expressions of the Caribbean. In Cuba, she performed with Pancho Portuondo's orchestra, followed in 1952 by a trip to New York where her songs were widely known by several fans, and she started recording with pianist and composer René Touzet.

Esther Forero returned to Colombia in 1959, after 10 years of spreading the country's Caribbean music abroad. She began recording her music with orchestras such as those of Pacho Galán, Nuncira Machado, Aníbal Velásquez, and Clímaco Sarmiento, with singers including Gabriel Romero, Joe Arroyo, and Alfredo Gutiérrez. At her initiative, in 1974, a lost tradition of Barranquilla's Carnival was rescued – that of performing nightly parades with Cumbiambas (a folkloric rhythm and dance from Colombia) and tamboras(a percussion instrument that originated in the Dominican Republic made of recycled barrels and is played using 2 headed drums.) This night festival became known as La Guacherna. In 1975, she recorded Érase una vez en La Arenosa ("Once upon a time in the sandy city") – "Arenosa" (sandy) being an endearing term for Barranquilla – under the baton of maestro Pedro "Pete" Vicentini and accompanied by singer Alci Acosta. This recording tells the city's story in song and became an integral part of its culture.

Esther Forero died on Friday, 3 June 2011 at age 91 at La Asunción Clinic, in her hometown of Barranquilla, after complications in several organs in her body.