Belinda "Lindy" Morrison (born 2 November 1951) is an Australian musician originally from Brisbane, Queensland. She was the drummer in indie rock group The Go-Betweens from 1980 to 1989, appearing on all the band's releases from their first LP in 1981 until the band's first break up on 26 December 1989. Morrison has also performed in Silent Figures, Shrew, Xero, The Four Gods, Deep Blue Sea, Cleopatra Wong (with Amanda Brown ex-The Go-Betweens), and Tuff Monks. She played drums in The Rainy Season from 2007 until 2011. 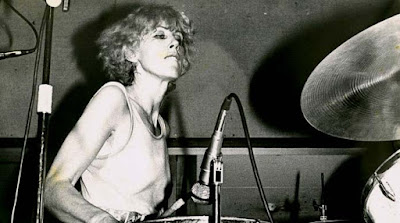 Morrison's first band, Shrew, performed in 1976 and 77. They were an all-girls acoustic band with members playing clarinet, saxophone, piano and guitar. Their repertoire consisted mainly of covers of 1940s pop songs. In 1978, Morrison's joined the band Xero. At the time, members included Irena Luckus, Nicki Nought and Deborah Thomas. The band started by performing Patti Smith and other punk covers before contributing their own material. Morrison said she left in 1981 because, "They wanted drum-machines and synthesisers."

The Go-Betweens formed in 1977 in Brisbane, Queensland with Robert Forster and Grant McLennan, the group had a succession of drummers and travelled to the United Kingdom in late 1979. They returned to Brisbane in 1980 and Morrison (ex-Xero) joined on drums and backing vocals. Their first single with Morrison, "Your Turn My Turn" appeared in September 1981 and was followed by "Hammer the Hammer" in March 1982. They recorded ten tracks as demos in Brisbane during 1981, which were released as Very Quick on the Eye by Man Made Records in 1982.

The band's first official album, Send Me a Lullaby, produced by The Go-Betweens and Tony Cohen, appeared in February on Missing Link in Australia. Morrison provided the album title, in preference to Two Wimps and a Witch, from a Zelda Fitzgerald novel Save Me the Waltz. Forster and McLennan wrote all the tracks, they alternated lead vocal duties, except "People Know" which had Morrison on vocals and James Freud (Models) guesting on saxophone. In 2002, UK label Circus released a 2× CD version of Send Me a Lullaby which included "After the Fireworks" recorded as a collaboration with The Birthday Party's Nick Cave on vocals, Mick Harvey on piano and Rowland S. Howard on guitar. It had been released as a single under the band name, Tuff Monks in 1982 on Au Go Go Records.

The Go-Betweens returned to UK and recorded their second album, Before Hollywood (May 1983), with John Brand producing. It established them as cult favourites . In 2001, "Cattle and Cane" was selected by Australasian Performing Right Association (APRA) as one of the Top 30 Australian songs of all time. Following album releases were, Spring Hill Fair (September 1984) and Liberty Belle and the Black Diamond Express (March 1986). Amanda Brown joined later in that year.  Tallulah (June 1987), produced by The Go-Betweens for True Tone and Beggars Banquet. LO-MAX Records released a 2× CD version of Tallulah in 2004, one of the additional tracks, "Doo Wop in 'A' (Bam Boom)" was co-written by Morrison, Brown, McLennan and Forster. In November 1987, The Go-Betweens returned to Australia and John Willsteed (ex-Xero with Morrison) replaced Robert Vickers on bass.

16 Lovers Lane (1988), was the group's most commercial offering, providing the alternative radio hit "Streets of Your Town" (1988), which became the band's biggest chart hit in both the UK and Australia peaking in the Top 100. The follow-up single "Was There Anything I Could Do?" was a No. 16 hit on US Modern Rock radio stations. Minimal commercial success were hardly the hoped-for breakthrough for the band, and after recording six albums, Forster and McLennan disbanded The Go-Betweens in December 1989. Brown and Morrison formed Cleopatra Wong in 1991.

Morrison is also the author of a short workbook entitled "Australian women in rock and pop music" and made an hour-long video to accompany it. Intended as student material it is housed in the Performing Arts Collection, the Arts Centre, Melbourne, and the National Library of Australia. She currently resides in Sydney and works in community music, for example, the Wataboshi Festival. One of her part-time jobs is as a community musician, in which she directs a group of intellectually disabled musicians known as The Junction House Band.